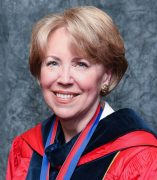 Throughout the world, Dr. Ferrans is known for innovative quality of life research, with her Ferrans and Powers Quality of Life Index (QLI) now translated into 21 languages and published in 400 studies.  Baseline QLI scores have been predictive of survival in breast, prostate, and colorectal cancer, independent of cancer stage. The QLI also is one of the most commonly used questionnaires in cardiac and pulmonary rehabilitation programs across the USA.  Recommended by the American Association of Cardiovascular and Pulmonary Rehabilitation for more than 20 years, the QLI has documented improvements in quality of life during the rehabilitation process.

Through her research, advocacy, and policy work, Dr. Ferrans has been a leader in reducing the breast cancer death rate among African-American women in Chicago.  At its peak, Chicago had one of the largest disparities in breast cancer mortality in the nation, with African Americans dying at twice the rate of Caucasians. Dr. Ferrans and her team launched community-based outreach program to promote screening, focusing on cultural beliefs, which reached more than 8,500 African American women (funded by NIH).  In addition, as one of the founders of the Metropolitan Chicago Breast Cancer Task Force, Dr. Ferrans spearheaded examination of the barriers to access to mammography. She was one of the primary authors of a report outlining causes for the disparities and recommendations to address them. The Illinois Reducing Breast Cancer Disparities Act was drawn directly from this report and in 2009 was enacted into law, to improve access to screening and mammography quality throughout the state.  Since the Task Force first released its report, mortality rates for black women have decreased 13.87%, giving Chicago the greatest decrease among the ten US cities with the largest African American populations during this period.  This work provides a model for successful dissemination of research and interdisciplinary collaboration to create effective changes in health care and policy.